Well, Eve’s 2 month birthday is on Saturday, and in light of that fact (and that we’ve had multiple requests for pictures & videos), we thought we’d put together a few pictures.

Immdiate thought: the second child gets way, way less pictures than the first. By this time in Abigail’s life, we had a few albums’ worth of material. Everything she did was so new, so amazing, so
noone-has-ever-seen-this-before-they-have-to-see-it!!! Evelyn’s progress is not like this because a) we’ve been through this before and b) we’re busier with two babies in the house.

As I understand it, this is pretty normal. It’s not because she’s any less special or because we care any less about her. 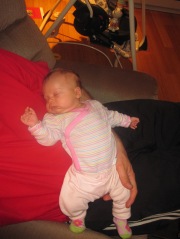