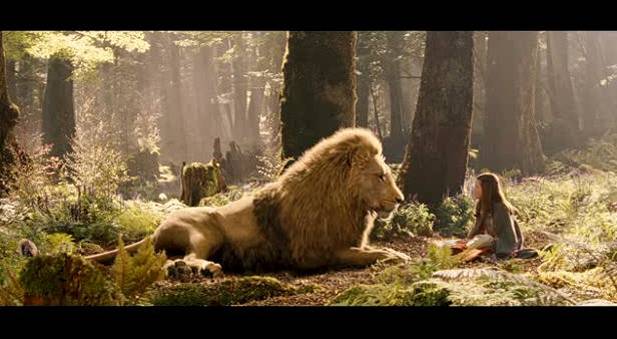 Lucy sitting and talking with Aslan

I’m surprised how much Abbey has taken to the Narnia books. There’s a lot of “layers” to the Narnia series, and I’m eager to see how much she actually comprehends.  So I try to ask questions, while we’re reading and afterwards, that poke around the themes to see how much she’s actually taking away with her.  Most of these themes tie up neatly in the character and actions of Aslan, so I thought I’d spend an entry or two summarizing Abbey’s grasp of the ideas with her understanding of Aslan.

First is one of the more well known lines of all of Narnia, that though Aslan is Good, he nevertheless is a lion and thus not tame. Here’s the context:

Aslan a man? Certainly not. I tell you he is the King of the woods and the son of the great Emperor-beyond-the Sea. Don’t you know who is the King of Beasts? Aslan is a lion – the Lion, the great Lion.”

“Ooh!” said Susan. “I’d thought he was a man. Is he quite safe? I shall feel rather nervous about meeting a lion.”

“That you will, dearie, and make no mistake,” said Mrs. Beaver, “if there’s anyone who can appear before Aslan without their knees knocking, they’re either braver than most or else just silly.”

“Safe?” said Mr. Beaver. “Don’t you hear what Mrs. Beaver tells you? Who said anything about being safe? ‘Course he isn’t safe. But he’s good. He’s the King, I tell you.”

So I ask Abbey how Aslan could be both good and not safe.  ‘Well, he’s not safe because He’s powerful and King of the World’, she said.  Fair enough, but then how could he be Good?  Shouldn’t Good be also safe?’

And, though she acknowledged that’s a tough one, she nevertheless shrugged off the seeming contradiction.  ‘well, he’s a powerful lion, but he’s also very nice.’

I’m not sure much of the contradiction is really registering with this four-year old.  But that’s probably just as it should be.  We’ll work on that one.