Ten Year Anniversary of Arriving in the Northwest/ Cascadia

Drew & me on the Oregon Coast, in early 2006- can you see the excitement in our eyes? 🙂  Drew was accompanying me on my way from Chicago to Vancouver to go to school.

At the beginning of 2006, a 27-year-old Tim Kniffin set out to go to seminary.  Up to this point, he had lived almost entirely in the Midwest.  But he had found a really intriguing seminary in Vancouver, BC- so intriguing, it was worth moving across the continent, to a new city, to attend.

Accompanying me on the several-day drive across the continent was my Dad and my brother, Drew.  Here’s a video of us along the way:

As you can tell, us Midewestern boys are pretty excited about being out in a new, mysterious, dazzlying beautiful area.  And so it was, and so that feeling stayed and grew within me.  I loved the new area I lived in. But the plan was always to go to school and come back to home.  I enjoyed the Mid-west, and never had intended on leaving it permanently.

The thing was, this area grew on me.  Slowly, constantly, like a virus (but in a good way :)), I began to grow attached to the area and the people here. And the longer I stayed, the more I realized that it had become a part of me.  Combine that with meeting a girl and starting a family here in the area, and it became easier and easier to imagine this becoming… home.

I’m now proud to call myself a Northwesterner.  The land, the people, the area… it’s a part of me.  And I’m glad that it’s become a part of my family, too. 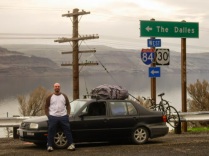